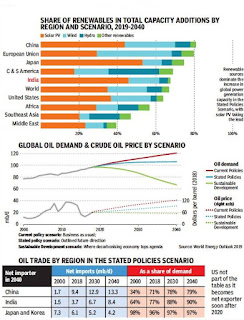 India’s oil demand will double to more than 9 million barrels a day, marking the largest absolute consumption growth for any country, and its dependence on imports will rise to 90% by 2040, according to the International Energy Agency’s latest World Energy Outlook.

This means the Indian economy will continue to depend in the near term on oil or fossil fuels in spite of the government’s stress on renewable energy and electric vehicles. This does not augur well as the suggested price trends in business as usual or stated policy environment scenarios do not offer any relief on the price front in spite of subdued demand growth from other economies and rising exports from new players such as the US and Brazil.

Oil is one of the key elements of the government's fiscal math. Costlier fuel cramps government's fiscal room for social spending or stimulus as it disturbs macro-economic parameters by raising costs for consumers, farmers, transporters and manufacturers. The report says a third of the growth in India’s oil will come from trucks. Another quarter will come from passenger cars, with the Indian car fleet growing by a factor of seven between now and 2040. Use of oil as a petrochemical feedstock will contribute the remaining 15% demand. On the global stage, the Outlook sees the oil trade becoming increasingly centred on Asia, with China soon overtaking the European Union as the world’s largest oil importer and holding that position to 2040, despite the flattening of its oil demand in the 2030s.

The Outlook also sees the influence of traditional players in the oil market waning.