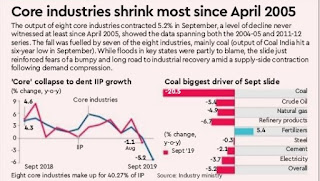 India’s core sector output contracted 5.2% in September, posting its worst performance in 14 years and suggesting that the economy may have slumped further in the second quarter of the current financial year.

Economists said the sharp contraction showed the severity of the industrial slowdown and a recovery may take time.

The Index of Eight Core Industries, which measures output in coal, crude oil, natural gas, refinery products, fertilisers, steel, cement and electricity, grew 4.3% in September last year. The estimate for August was revised to 0.1% from a contraction of 0.5% earlier.

These industries have a 40% weightage in the IIP, which may fall further from a 1.1% contraction in August, its worst performance in over seven years.

ICRA expects industrial growth to contract 2.5-3.5% in September. The official numbers will be released on November 11.

Recent data such as festive retail sales, currency in circulation and automobile sales suggests the economy may have bottomed out in the July-September quarter, picking up some pace in October, with the rally in the stock markets lifting sentiment.

RBI is expected to reduce rates again in December, given the deterioration in industrial activity. It has already cut the key repo rate by 1.35 percentage points in the current year.

All sectors in the core index, with the exception of fertilisers, posted a contraction. Coal, cement, steel and refinery products were impacted by the prolonged monsoon, Care Ratings said. Coal production fell 21% in September after an 8.6% drop in the previous month, adversely impacting electricity generation, which declined 3.7% in September against a 0.9% fall in August.