WPI inflation at over 3-year low 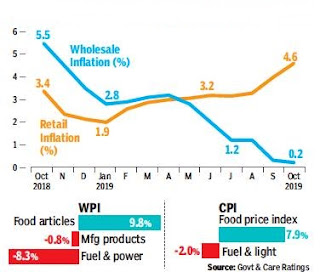 Wholesale price inflation moderated to a nearly three-and half-year low in October, dragged down by a contraction in manufactured product, fuel and power prices, but the fall was limited by an increase in food prices to near double-digit levels.

Inflation as measured by the wholesale price index eased to 0.2% in October, slower than 0.3% recorded in the previous month and 5.5% in the year earlier period.

Inflation in the manufactured goods segment fell by 0.8% in October, its lowest level since April 2016. The WPI in manufactured goods was 4.6% in the same month a year-ago. Food price inflation shot up to a 63-month high during the month.

Inflation in the fuel and power group contracted for the fifth straight month and stood at (-8.3%), a 39-month low. This is largely due to soft global crude oil prices.

Divergence between WPI and retail inflation also increased. Consumer price inflation rose to a 16-month high of 4.6% in October, largely led by food and vegetable prices.

RBI largely looks at the retail inflation for its monetary policy review, although it also takes into account other inflation numbers, while deciding on rates. Economists said they expect the central bank to cut interest rates in December as several other data prints have pointed to a slowing economy. 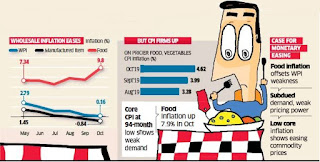