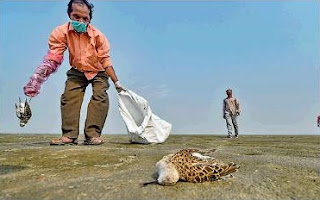 Carcasses of 1,622 more migratory birds were found strewn across Rajasthan’s Sambhar Salt Lake amid fears that the mystery illness behind the deaths might have taken a bigger toll on the wintering visitors than initially estimated.

Since Monday, forest department teams have buried 2,338 carcasses of birds from more than 25 species, including trans-Himalayan migrants.

“As suggested by veterinarians, we have dug a pit measuring 10x10 to bury the birds after sprinkling lime and salt. We will continue to look for more carcasses that might be floating or lying along the 5 km span of the salt lake,” forest range officer Rajendra Singh Jakhar said.

Veterinarians suspect water contamination or algae poisoning to be the cause of the deaths. The forest department has collected water samples from the lake and sent it to the state pollution control board for tests. “We will know from the test results whether toxicity of water or a bacterial or viral infection is killing the birds,”he said.

Viscera samples had been sent to the forensic science laboratory in Bhopal to find out if an infection was responsible for birds falling dead. Jaipur-based veterinarian Ashok Kumar ruled out the possibility of bird flu, saying water contamination and algae were the prime suspects.