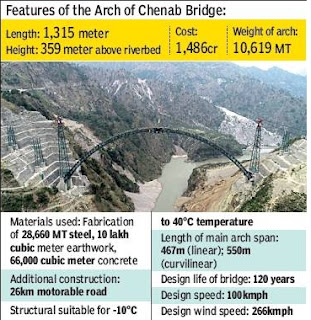 Indian engineers created history by completing the arch of the world’s highest railway bridge on Chenab river in Jammu and Kashmir, which is 35 metres higher than the Eiffel Tower in France. The completion of the blast proof arch now paves the way for expediting the direct rail link to the Valley from the rest of India.

Officials said this was the most challenging project the railways had ever undertaken and the most critical portion of Udhampur-Srinagar-Baramulla Rail Link, whose construction started in August 2004.

Speaking to reporters at Kauri in J&K, general manger of Northern Railway, Ashutosh Gangal, said what currently takes 12 hours by road (Katra-Banihal), will take half the time after completion of the bridge. He said the bridge is likely to be completed in a year and the entire rail link would be completed in two and a half years.

Gangal said the arch consists of steel boxes in which concrete will be filled to improve stability while the stay cables which are presently holding the arch will be removed as it has become self-supporting after the installation of the last piece.

He further said the overall weight of the arch is 10,619 metric tonnes and the arch work was done by overhead cable cranes for the first time by the Indian Railways.

Prime Minister Narendra Modi lauded the achievement by Indian engineers and tweeted, “The capability and trust of the countrymen is setting an example for the world. This feat of construction not only showcases the growing prowess of India in the field of modern engineering and technology but also is an example of changing work culture marked by the ethos of ‘sankalp se siddhi’.”

The work on the rail link had started 17 years back and along the way missed several deadlines.

The bridge is being projected as an engineering marvel for several unique features including its strength which can withstand wind speeds of up to 266 kmph and earthquake forces of highest intensity zone-V in India.

Besides this the bridge has also been designed for blast load in consultation with the Defence Research and Development Organisation. This is the first such design in the country that can remain operational at a restricted speed of 30 kmph after removal of one pier or trestle, the railway ministry said.

It is also for the first time that the Indian Railways used phased array ultrasonic machines and established a NABL-accredited lab at the site for weld testing. 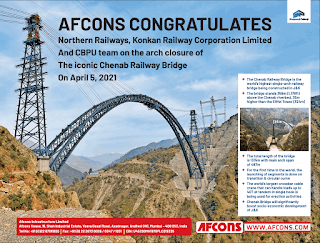