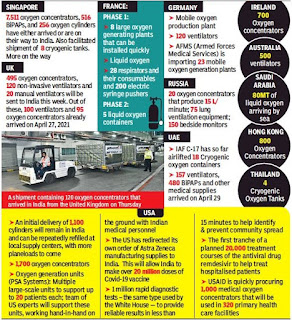 As India battles an unprecedented second wave of Covid, over 40 governments have committed to helping out India with essential medical requirements.

Foreign minister S Jaishankar held a briefing with all heads of missions on the current crisis and his message was to seek out all manner of support to combat a Covid surge that has seen a UK variant and a double mutant adding to the virulence of the disease.

Envoys have been tasked with acquiring all manner of oxygen support — no tanker, concentrator or cylinder is too small at a time like this. Given India’s size, the main demands are — medical oxygen, Remdesivir and Tocilizumab to treat moderate to severe Covid.

Briefing journalists on Thursday, foreign secretary Harsh Shringla said government had already made a quick assessment of India’s requirements, which were being conveyed to countries who had expressed interest in helping out. Help was coming from governments, private sector, diaspora and individuals. The consultations, he said, had been happening at the highest levels.

The foreign minister told envoys that India is reaping the benefits of both the Vaccine Maitri initiative as well as the Covid assistance proffered to many countries when they battled their own surges. This has seen India being assured of help at a time when the ruling global sentiment seemed to be ‘each on their own’.

Envoys were told not to become engrossed in battling negative perceptions and opinions in media. This would distract them from their primary job, which is to access and procure as much medical assistance as is possible. This instruction came after what is seen as an unnecessary rejoinder by the Indian high commission against an article in The Australian.

The sense of urgency, Jaishankar said, had to be maintained, because the current need is a short term one, to fill in the gap while India ramps up its own capacities.

At the operational level, he said, the Empowered Group 2 was engaged in identifying sources of equipment that India needed, clearing their passage into the country and arranging for their dispatch to the parts of the country where they are needed.

Shringla said large Indian companies, part of the global supply chains were sourcing equipment and oxygen as well. “We are trying to channelise the assistance we’re getting, getting them to different parts of the country.” He said the government has also given these imports blanket exemption from certain taxes. The Indian Red Cross has been designated as the organisation receiving these items as they come in from different parts of the world.