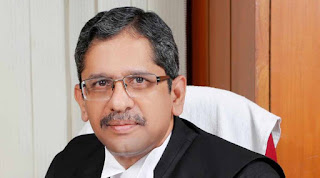 President Ram Nath Kovind appointed Justice Nuthalapati Venkata Ramana, the seniormost Supreme Court judge, as the next Chief Justice of India. Justice Ramana will take oath as the 48th CJI on April 24 and will have a tenure of one year and four months.

A staunch advocate of the right to access to justice for the last person in the socioeconomic hierarchy, Justice Ramana was a first generation lawyer born in an agriculturist family in Krishna district of Andhra Pradesh. Leaving behind his student activist days, he had briefly experimented with journalism by working in a leading Telugu newspaper before becoming an advocate.

A soft-spoken person, Justice Ramana has given many important and hard-hitting judgments, including the ruling on providing 4G internet services in Jammu and Kashmir, where the government had suspended high-speed internet services after scrapping the state’s special status under Article 370. The Justice Ramana-led bench’s ruling that “access to internet” is a fundamental right of citizens found many admirers for him and the SC.