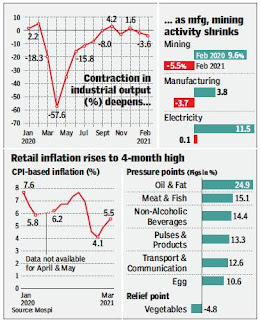 Retail inflation soared to a four-month high in March on the back of high food prices, while industrial output contracted for the second consecutive month in February, adding to worries over health of the economy, amid the backdrop of rising Covid cases.

Economists attributed the increase in food prices to constrained supply, increased demand and higher transportation costs and cautioned that localised lockdowns to curb spread of the infection could further impact prices.

“With renewed pandemic restrictions across the country, elevated global prices across commodities and higher transportation and logistics costs, price pressures are likely to prevail in the coming months for most segments. We expect CPI inflation to rule above 5% for the next two-to-three months,” Madan Sabnavis and Kavita Chacko, economists at Care Ratings, said in a note.

Separate data released by NSO showed industrial production shrank 3.6% in February, sharper than the revised 0.9% decline posted in previous month, and dragged down by a decline in manufacturing, mining, capital goods, construction goods and consumer nondurables. The manufacturing sector, which accounts for nearly 77% of the index, contracted 3.7% in February compared with an expansion of 3.8% in the year-ago period. The only bright spot was consumer durables, which rose 6.3% compared to a contraction of 6.2% in February 2020.