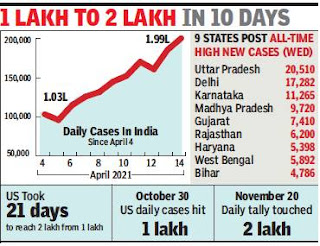 India reported nearly 2 lakh fresh Covid-19 cases on Wednesday, with the daily case count almost doubling in 10 days amid an unprecedented surge in the pandemic.

The US, the only other country to log over 2 lakh cases in a day, had taken 21 days to hit the grim milestone after crossing the 1-lakh mark. Cases in the US hit 1 lakh on October 30 last year and crossed 2 lakh on November 20. The country went on to record a peak of 3,09,035 cases in a single day on January 8, as per worldometers.info.

Such has been the second-wave surge in India that daily cases have hit a new high on nine of the last 11 days — the only two exceptions being Mondays, when numbers usually drop sharply due to lower testing and staff shortages over the weekend.

The death toll from the virus was over 1,000 for the second day running as 1,038 fatalities were recorded on Wednesday, the highest daily toll since October 2. On Tuesday, India had reported a total of 1,035 deaths.

The pandemic continued to spread alarmingly through several states, particularly those in the Hindi heartland. As many as nine states posted their highest-ever rise in daily count on Wednesday.

Through the day, huge crowds of migrants from UP and Bihar thronged the Lokmanya Tilak Terminus, desperate to return home. Among them were daily wagers who worked in shops, restaurants and markets. Besides, there were electricians, carpenters and drivers who found their work drying up.

Activists working with the poor say the Maharashtra government’s Rs 5,476-crore relief package is too little given the enormity of the distress caused by the stringent restrictions. The state government is offering 3kg of wheat and 2kg of rice free of cost for a month for those who hold ration cards under the National Food Security Act. The state has 7 crore listed beneficiaries.

The state’s relief scheme will also provide two lakh Shiv bhojan thalis free of cost to the needy for a month.

The state has also announced relief worth Rs 1,500 each for 12 lakh construction workers, five lakh hawkers and 12 lakh rickshaw drivers for a month.