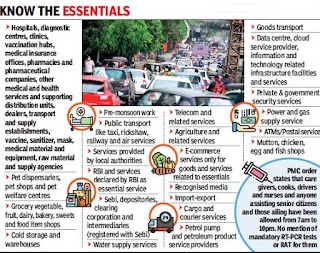 Joint commissioner of Pune police Ravindra Shisve made it clear that people should prefer to walk down, instead of using vehicles, to neighbourhood shops for buying essentials.

“People can use vehicles only in case of emergency and will have to explain the nature of emergency travel to the policemen at the check points. People should avoid unnecessary travel and are requested to cooperate with the police,” he said.

“Only vehicles and persons involved in essential services are allowed to move on the roads. The weekend lockdown will remain in force and people should follow the existing rules during the weekends. The police will implement all the directives issued by the PMC commissioner,” he said.

Sudhir Hiremath, deputy commissioner of Pimpri Chinchwad police, said, “No one is expected to come out on the roads just for a walk or bicycle ride during the next 15 days.”

He said, “People can go to their nearest grocery store or dairy to buy essentials, between 7am and 6pm. They are not expected to go to some other part of the city for the same. After 6pm, only medical stores and food delivery people will be permitted.”

Hiremath said the police would not restrict people going for vaccination, provided they must carry necessary documents with them. He said there were 50 checkpoints in the Pimpri Chinchwad police commissionerate. “We will take strict action against people going out after 6pm,” the officer said.

“Divisional commissioner Saurabh Rao held video conference meeting with industrial representatives on Wednesday. We categorically told them their employees and vehicles should carry necessary documents and identity cards,” he said.