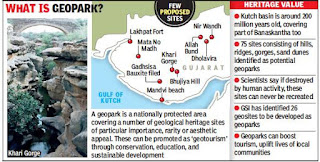 As many as 75 sites that could potentially be designated as a geopark - nationally protected areas housing heritage sites of geological importance - have been identified in the 200-million-year Kutch rift basin.

The details of these geosites, discovered by the geologists of Kutch University over the 20 years, have been recently published in the reputed journal of ‘The European Association for Conservation of Geological Heritage.’ “This basin is a natural museum of geology. Some geosites even date back to the Jurassic Age. If declared a geopark, it will also help in the socio-economic development of the locals as they will become tourist spots,” said MG Thakkar, head of department, earth and environment science, Kutch university.

The United Nations Educational Scientific and Cultural Organization has started recognizing geoparks across the world under its UNESCO Global Geopark programme with an objective of giving due recognition to these sites which can be an important source of study and research as well as preservation.

The Geological Survey of India has identified 26 geosites across the country to be developed as geoparks but not a single from Kutch figures in the list.

The paper emphasizes that the Kutch basin merits a place amongst the important geoheritage sites of the world. It It has been authored by Gaurav Chauhan, SK Biswas, M G Thakkar and Kevin N. Page of department of earth and environment sciences and Camborne School of Mines, University of Exeter, Penryn, the UK Co-author S K Biswas added, “The purpose of this study is to create awareness among central and state authorities about the need to protect natural geological sites and monuments for future generations.