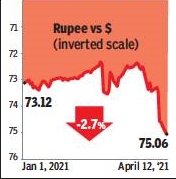 The rupee suffered from some sharp weakness, ending below the 75-to-the-dollar mark for the first time in eight months. The drop came after foreign funds were forced to sell in the domestic market as rising Covid cases triggered fears about further delay in India’s economic recovery. At close, the rupee was at 75.06 to a dollar — weaker by 32 paise from its Friday close of 74.74.

According to Reliance Securities senior research analyst Sriram Iyer, in addition to the market’s fears about a further setback to the economic recovery process, “the likelihood of higher retail inflation also weighed on sentiments”.

On Monday evening, the government said that the retail inflation rate for March was 5.5%, up from 5% a month ago, while the index of industrial production showed a slide in February with IIP down 3.6%. The interbank forex markets are closed on Tuesday and Wednesday. So, market players will get a much-needed respite for two days.