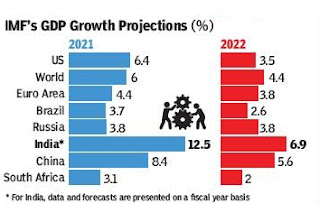 The International Monetary Fund raised India’s growth projections for 2021-22 to 12.5% from its January estimate of 11.5%, making it the fastest growing major economy in the world.

The latest upgrade from the IMF for India’s economy comes against the backdrop of a surge in Covid-19 infections, which have prompted some local lockdowns and could have an impact on overall growth.

Top Indian policy makers have so far said there is no need to scale down the Reserve Bank of India’s 10.5% GDP growth projection for 2021-22. They say that the country is better prepared to deal with the second wave of the pandemic with vaccinations progressing at a brisk pace.

The World Bank had recently forecast the Indian economy to grow in the 7.5% to 12.5% range in 2021-22, given the significant uncertainty at this stage about both epidemiological and policy developments. It had also said that it expects India’s economy to grow more than 10.1% in the 2021-22 — a sharp upward revision of 4.7 percentage points from its January 2021 forecast. It is estimated to contract by 8% in 2020-21 but most estimates see growth rebounding strongly in the current fiscal year. But some economists see the recent surge in Covid-19 cases and the steps taken by authorities in states such as Maharashtra to combat the pandemic hurting growth and the ongoing recovery.

The IMF’s World Economic Outlook showed that China is projected to grow 8.4% in 2021 and 5.6% next year. India, at 6.9%, is also expected to grow faster than China in 2022-23 and retain its title as the fastest growing major economy for the second consecutive year. For 2021-22 if the IMF’s projection is realised, India would be the only major economy to post double digit growth.

The report said that due to unprecedented policy response, the Covid-19 recession is likely to leave smaller scars than the 2008 global financial crisis. However, emerging market economies and low income developing countries have been hit harder and are expected to suffer more significant medium-term losses.

IMF chief economist Gita Gopinath said the upgrades in global growth for 2021 and 2022 are mainly due to upgrades for advanced economies, particularly to a sizeable upgrade for the US (1.3 percentage points) that is expected to grow at 6.4% this year. This makes the US the only large economy projected to surpass the level of GDP it was forecast to have in 2022 in the absence of this pandemic, Gopinath said in her blog.