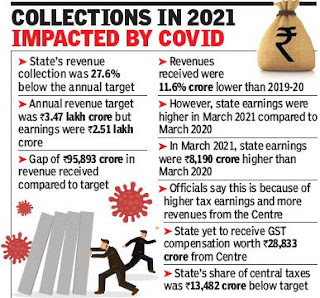 Maharashtra has ended the financial year with its annual revenue 27.6% below the target set for the year, as the pandemic crushed economic activity and tax collection. Figures till March 31 show a gap of Rs 95,893 crore between the target and the actual revenue generated for 2020-21.

The silver lining was that the revenue generated in March 2021 was higher than in March 2020 by Rs 8,190 crore. Indeed, at Rs 33,721 crore, the revenue generated in March 2021 was the highest in a single month in the financial year. Officials say this is the result of higher tax collections in the last month of the financial year and a larger chunk of payouts from the Centre, including GST compensation and the state’s share of central taxes.

The latest data shows that the state generated revenue worth Rs 2.5 lakh crore during 2020-21 compared to a revenue target of Rs 3.5 lakh crore.

However, the pandemic also affected the Centre’s tax collections resulting in lowered GST compensation and share of central taxes passed onto states.

Maharashtra ended the financial year with a shortfall in GST compensation from the Centre worth Rs 28,833 crore. The Centre had also cut its tax transfers to states during the year, impacting revenue generation. The state received Rs 13,482 crore less in its share of central taxes compared to the original target. The state was expecting to receive Rs 48,109 crore, but ended up receiving Rs 34,627 crore by the end of the financial year.

The state’s financial position remains bleak at the start of the new financial year. It’s debt is at an all-time high of Rs 6 lakh crore and it faces its highest-ever revenue deficit. The second Covid wave is also expected to hit sectors, including tourism and hospitality, which expect to generate business during the summer vacation.

“Typically, there is not much revenue generation in the first month of the new financial year, but the tourism sector in particular sees a lot of activity, which will be affected by the rise in cases,” said a senior official.