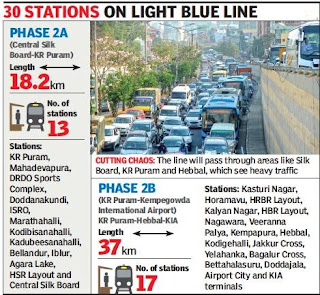 Speaking to reporters after a Union cabinet meeting, railway minister Piyush Goyal said: “The government has approved Bengaluru Metro’s Phase 2A from Central Silk Board Junction to KR Puram and Phase 2B from KR Puram to Kempegowda International Airport via Hebbal Junction.”

The line is crucial for the city as it will pass through its IT corridor housing several multinational companies as well as areas like Silk Board, Bellandur, Marathahalli, KR Puram, Nagawara, Hebbal, Yelahanka and KIA.

“The project will streamline the urban transportation system in Bengaluru, which is stressed due to intensive developments, increase in the number of private vehicles and heavy construction, putting stress on travel infrastructure and industrial activities, and provide the people safe, secure, reliable and comfortable public transport,” a statement issued by the central government said.

Welcoming the decision, chief minister B S Yediyurappa said this will enhance ease of living for citizens by decongesting Bengaluru.

Union minister for housing and urban affairs (independent charge) Hardeep Singh Puri said: “Once completed in the estimated 54 months, this project will play a key role in decongesting the city, which contributes 40% to India’s IT exports and is home to a large number of IT parks, hubs & industries, many of which are located on the route.”

“This connectivity will ease traffic congestion on roads leading to the airport. It will also contribute to reduction of greenhouse gas emissions,” he added.

BMRCL had prepared a detailed project report for ORR Metro in 2016 at a cost Rs 4,202 crore and it was to be operational by 2021. However, the plan was deferred as the project didn’t get clearance from the Centre. The agency is now planning to make it operational by 2025-2026. 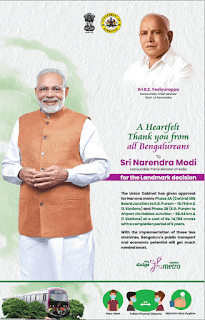