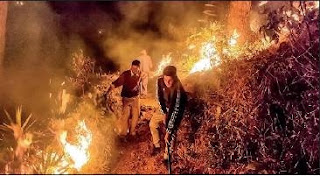 With wildfires continuing to wreak havoc in Uttarakhand, the blaze reached the Kedarnath Wildlife Sanctuary on Sunday and gutted around 500 trees. This has raised a major concern among forest officials as the sanctuary houses rare, near extinct animals like the Alpine musk deer, Himalayan tahr (bovines found in Himalayas), Himalayan griffon (a vulture native to the Himalayas), Himalayan black bear (a subspecies of the Asian black bear found in the Himalayas) and snow leopards as well as trees like oak, birch and rhododendron. As per data provided by the forest department, a total of 9,550 trees have been gutted till now in the fires which began in October last year and forest ecosystems spread over 1,359.8 hectares have been adversely affected.

Meanwhile, the Centre on Sunday directed use of two IAF choppers to help in dousing the flames as well as National Disaster Response Force personnel to be deployed in the hill state. The state government had written to the defence ministry on Saturday citing “a worsening situation of forest fires” and had asked for two IAF helicopters, one each to be stationed in Garhwal and Kumaon.

Union home minister Amit Shah on Sunday tweeted about the Uttarakhand forest fires, saying “The central government has issued an order for immediate deployment of two choppers and NDRF teams in Uttarakhand to arrest the fire and curb destruction of life and property”. Chief minister Tirath Rawat had spoken with the home minister earlier in the day, apprising him of the forest fire situation in the state. “While one chopper would be stationed at Tehri - to cover areas under Garhwal region - the second one would operate from Almora and Nainital and cover the Kumaon region,” the CM said. The CM also held a meeting with senior officials from affected districts as well as police and disaster management departments. Officials have been asked to distribute kits of torches and firefighting equipment at the block level, so villagers can also be roped in to fight forest fires. Four human and seven animal deaths have been officially recorded till now due to the forest fires.

Head of forest force Rajeev Bhartari said, “IAF helicopters were the need of the hour as our teams cannot reach remote areas. Our entire workforce is using the latest equipment and acting on war footing, leaving no stone unturned to douse the flames. We are co-ordinating with other departments and if needed, will seek support of more expert personnel.” Leaves of all forest staff have been cancelled for the next two months and 10 senior IFS officers have been tasked with reviewing the wildfire situation in as many hill districts, he added.

Divisional forest officer of Kedarnath Wildlife Sanctuary mit Kanwar meanwhile said that he believed the fires were due to human intervention.