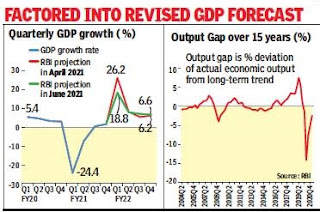 The Reserve Bank of India has estimated that the second wave may result in a Rs 2-lakh-crore loss in output during the current fiscal, in what is the first such exercise conducted by the central bank or the government.

A loss of economic output may not have a direct correlation with the GDP, but points to some loss in the value-addition across the economy. Already, several agencies, including the RBI, have lowered growth projections for the year.

The RBI’s output loss is factored into its revised GDP forecast in the latest monetary policy estimates, where it slashed growth projections from 10.5% to 9.5%. The state of the economy report released on Wednesday said the projection was on the assumption that real GDP will grow by 18.5% in the first quarter, which is on a much lower base given the contraction last year.

Providing more details on the economic impact of the second wave, the RBI said the rate of decline in deposits has been higher, indicating that household savings have dropped in sharp contrast to the first wave. “Additionally, currency holding with the public has also decelerated significantly to 1.7% during April 2021 in comparison to the growth of 3.5% a year ago, implying heavy outgo towards Covid-induced medical expenditure.”

It said the second wave’s toll is higher due to the impact on domestic demand as several aspects of aggregate supply, such as agriculture and contactless services, are holding, while industrial production and exports have surged amid pandemic protocols. “Going forward, the speed and scale of vaccination will shape the path of recovery,” the report said.

As for life beyond the pandemic, the report highlights the advantages of repurposing and reprioritising revenue and expenditures to extract “bang for the buck”. The report said that the public sector can lead the private sector in unlocking growth opportunities. In addition, it can partner the private sector, and step back to allow the private sector to take the lead in sunrise areas.

“While Covid has tested the limits of flexibility in fiscal policy frameworks in India as in the rest of the world, it has offered a unique opportunity to redefine fiscal policy in a manner that emphasises ‘how’ over ‘how much,” the report said.

The report, authored by RBI deputy governor M D Patra highlights the finance ministry estimates that to achieve herd immunity and regain recovery momentum, the target population to be vaccinated is 70 crore by September 2021 and around 113 crore more doses are needed. Accordingly, around 93 lakh vaccinations are required per day to achieve the herd immunity.