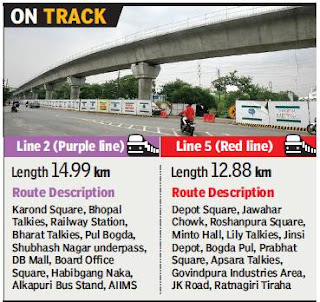 Existing metro area under construction of 6.4 km is about 70% complete, say sources. The challenge for Madhya Pradesh Metro Rail Corporation Limited, a joint venture of union government and MP, is to meet the target of launch date of first phase by 2023.

The metro project underway is on the proposed purple line. New phase, with an investment of Rs 421 crore, calls for construction of 8 elevated metro rail stations including viaduct portion within the stations and transition spans on either side of the stations. Route length of purple line is 14.99 km. Construction of line from Karond Square passing through Bhopal Talkies, Railway Station, Bharat Talkies and Bogda Pul would require underground railway construction. Other line is Red Line for Bhopal metro. Any metro would require a depot to start functioning. Proposed depot at Arera Hills (Stud Farm) was estimated to be wide enough in area. However, recent proposals to the state government have requested for more land acquisition. The land is government owned and proposal is expected to be cleared soon. Turn out area for connecting to about dozen lines requires a large turning radius for metro to be serviced at a depot.