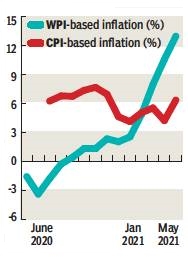 Retail inflation hardened to a six-month high in May, joining the rising trend in wholesale inflation that also strengthened to a record, but experts said the Reserve Bank of India may tolerate these levels for a while given concerns over growth.

Retail inflation, as measured by the consumer price index, accelerated to 6.3% in May from 4.23% in April, breaching the upper band of the RBI’s 2-6% range for the first time in six months, data from the statistics office showed.

Rising wholesale inflation, increasingly reflected in retail inflation as well, is going to make things difficult for the RBI, said Sunil Kumar Sinha, principal economist, India Ratings. “However, given the growth inflation dynamics, Ind-Ra believes RBI will not be in a hurry to tinker with either the policy rate or its accommodative policy stance,” he said.

In its monetary policy review earlier this month, the central bank had held rates and reaffirmed its accommodative policy as it pared the growth forecast for FY22 by a percentage point to 9.5%.

Most economists now expect the economy to grow at high single digits in FY22 against double-digit estimates at the beginning of the fiscal because of the severe second wave of the pandemic.