India Will Have To Fast Induct Anti-Drone Tech 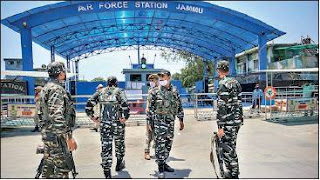 Weaponisation of commercially-available small drones and quadcopters for low-cost, high-impact strikes, which was in a way pioneered by the Islamic State or Daesh in Iraq and Syria, has now jolted India for the first time.

Fortunately, the explosive-laden drone attack on the IAF station at Jammu did not cause much damage or inflict casualties. But with small drones being regularly used since mid-2019 to courier weapons, explosives and drugs to Punjab and Jammu & Kashmir from across the border in Pakistan, it was only a matter of time before terrorists moved to the next level of using them for aerial strikes from the safety of stand-off distances.

With terror outfits rapidly adapting to technological advances, such attacks will only get deadlier in the future. “Other military bases and critical civilian infrastructure like oil refineries could be targeted. There is also the danger of terrorists using drones to deliver biological or chemical agents,” a senior officer said.

Indian military and police forces will have to gear up fast for such unconventional aerial warfare with induction of effective anti-drone technologies. These range from jamming and spoofing systems to disrupt the satellite or video command-and-control links of such drones for ‘soft kills’ to laser-based directed energy weapons for ‘hard kills’. DRDO has developed two anti-drone DEW systems, with a 10-KW laser to engage aerial targets at 2 km range and a compact tripod-mounted one with a 2-KW laser for a1 km range. But they are yet to be produced in large numbers.

The armed forces are now also importing a limited number of other systems like Israeli ‘Smash-2000 Plus’ computerised fire control and electro-optic sights, which can be mounted on guns and rifles to tackle the threat from small hostile drones in both day and night conditions. But Indian security forces are currently not equipped to tackle such threats. The military’s air defence systems, with advanced radars and missiles, are meant to counter large drones or unmanned aerial vehicles. “Small drones, which can even be launched from a balcony and have a flying range of 4-5 km, have a very low radar cross-section and cannot be tracked like larger UAVs,” another officer said. “It is virtually impossible to defend against such drones with conventional anti-aircraft guns or missiles. They are best countered by effective jamming and laser systems,” he added.