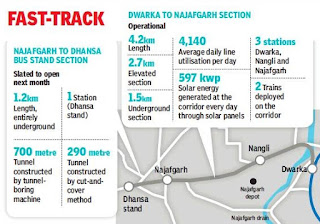 Delhi Metro’s Grey Line (Dwarka-Najafgarh) is all set to reach the Delhi-Haryana border at Dhansa next month. The 4.3-km Dwarka-Najafgarh section of Grey Line, connecting the rural parts of Najafgarh with the rest of the city through the Metro network, had opened to the public in October 2019. However, a small section of the corridor, which would extend it to the Delhi-Haryana border, remained to be open.

Transport minister Kailash Gahlot visited the upcoming station at Dhansa for an inspection. “I am happy to inform that the work of Dhansa Stand Metro station at Najafgarh has been completed. Soon it will be opened to the public. Inspected the station with DMRC officials today. This metro station also has a covered parking facility for about 150 vehicles,” Gahlot tweeted post his visit.

“We are making all efforts to try and open the Najafgarh-Dhansa section sometime later next month after complying with all statutory requirements,” said Anuj Dayal executive director (corporate communication), Delhi Metro Rail Corporation.

The 5.4-km Grey Line was not part of the original Phase-III project of DMRC and was instead added much later. Inaugurated in October last year, the Dwarka to Najafgarh section, which has a 2.7-km elevated stretch and 1.5-km underground section, has three stations — the elevated Dwarka and Nangli stations and the underground Najafgarh station.

The extension to Dhansa Bus Stand on Delhi-Haryana border was scheduled to open by December 2020 but due to the Covid-19 outbreak, work came to a halt and only resumed as part of the unlock guidelines. The 1.2-km stretch with one station was later slated to be completed by May 2021, but some work remained to be completed. According to sources, the final safety inspection of the section is likely to take place on July 10.

The Najafgarh-Dhansa Bus Stand section will be an extension to the presently operational Dwarka-Najafgarh Grey Line corridor. For the construction of the underground corridor from Najafgarh to Dhansa, two methods were used. While 700 metres of tunnelling was done using the Tunnel Boring Machine, another 290 metres of underground work is being done completed by the cut-and-cover method.

The heavy traffic on the stretch between Najafgarh and Dhansa stand was a major challenge faced by DMRC, while carrying out construction work.

Grey Line, Delhi Metro’s smallest corridor, connects Najafgarh with the rest of the capital, thanks to the interchange facility with the Blue Line (Dwarka-Vaishali/Noida Electronic City) at Dwarka. There are three trains deployed on the corridor and total travel time on this section will be six minutes and 20 seconds.