At 9.2%, fiscal deficit is highest ever for Centre 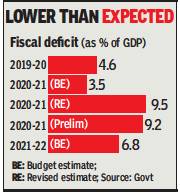 Against previously estimated GDP of Rs 194.8 lakh crore in 2020-21, the revised reading released by the National Statistical Organisation on Monday estimated the value of economic activity at a little less than Rs 197.5 lakh crore.

But even the better than estimated fiscal deficit is almost twice the Budget estimate of 4.6% of GDP in 2019-20. Economists are projecting that the government will overshoot its fiscal deficit target of 6.8% of GDP for the current financial year due to the second wave.

The pandemic had forced the government to significantly slash its revenue projections, while shoring up spending to meet requirements to support economic activity and poorer sections of the society through free foodgrain, higher allocation for the employment guarantee scheme and some cash support. The preliminary data released by the Controller General of Accounts on Monday showed that expenditure was 1.8% higher than the revised estimate and was estimated at Rs 35.1 lakh crore.

“There has been a sharp increase in the spending towards subsidies aggregating Rs 4.6 lakh crore in Q4-FY21 as against Rs 70,000 crore in Q3-FY21… Capex of the government has moderated… which does indicate that the government had to undertake cuts in capital expenditure to meet the fiscal deficit target,” CARE Ratings said. What also provided cushion was improved revenues during the last 60 days of the last fiscal year. During 2020-21, revenue receipts were estimated at Rs 16.3 lakh crore, almost 105% of the revised estimates. Tax revenue was estimated to be nearly 6% higher than the revised estimate.