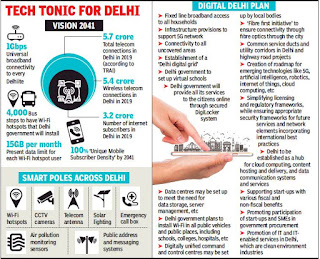 Universal broadband access to every home in Delhi and connectivity at speeds of up to 1 Gbps to all its citizens through Wi-Fi hotspots through a network of ‘smart poles’ across the city, infrastructure for 5G network, data centres — the draft Master Plan for Delhi 2041 has prepared a digital roadmap for the city.

The draft MPD41 notes that digital infrastructure and services are emerging as key enablers to Delhi’s growth, with the internet driving the app-based economy and services. In 2019, Delhi had over 5.7 crore phone connections, of which 5.4 crore were wireless connections, apart from 3.2 crore internet subscribers.

The draft plan states that Delhi needs to align its telecommunication infrastructure and targets to the National Digital Communication Policy of 2018 and the Telegram Right of Way Rules, 2016. It, accordingly, proposes strategies for a digitally enabled and connected city.

MPD41 notes that Delhi requires adequate infrastructure provisions to support higher service levels like 5G and above, full city fibre coverage and integration of the city’s digital systems with IoT, artificial intelligence, cloud computing and Big Data, among others.

The document suggests that ‘smart poles’ may be installed in public areas, which apart from acting as Wi-Fi hotspots, would also have CCTV cameras, air pollution monitoring sensors, telecom antenna, solar lighting, public address and messaging systems and emergency call boxes. This network of smart poles across the city will be connected to the digital systems of civic agencies.

As per the 'perspective plan for infrastructure service for Delhi 2041' of Delhi government, which forms an annexure to MPD41, at present a rental model to provide free Wi-Fi to Delhiites has been adopted. As part of this scheme, around 4,000 bus stops will be covered with a per user data limit of 15 GB.

By 2041, Delhi government can plan to cover the entire city with Wi-Fi, including access in all public vehicles and public places like schools, colleges, hospitals, etc., with the bandwidth at Wi-Fi hotspots of up to 1 Gbps per user. The government considers smart poles as the way forward to accelerate the growth.

The document also states that connectivity through fibre-optics is considered to be more efficient in terms of internet speed and reliability of services and ‘Fibre First Initiative’ of NDCP and regulations of ROW policy will facilitate augmentation of telecom infrastructure.

The state government also plans to establish Delhi as a hub for cloud computing, data communication systems, services and content hosting and delivery, apart from establishing centres of excellence including in spectrum management, telecom security and next generation access technologies.