Mumbai Metro III: 96% of tunneling work has been completed 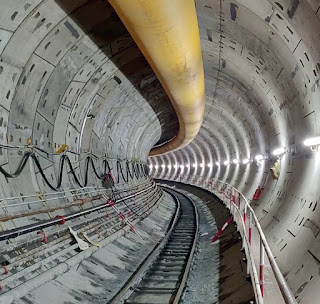 The 33.5-km long Colaba-Bandra-SEEPZ Metro-3 Corridor has completed 96 per cent of tunnelling work. “Total six out of seven contract packages have completed 100 per cent tunnelling,” said a spokesperson of Mumbai Metro Rail Corporation, the nodal agency appointed by the state government.

The metro line will connect the Cuffe Parade business district in the extreme south of the city to SEEPZ in the north-central with more than two dozens of stations.

Although the controversy over the metro depot is yet to be resolved, the underground Metro work is underway in full swing.

The line between Bandra Kurla Complex and Dharavi stations includes a 170-metre long twin-tunnel passing under the Mithi river.

“Apart from that, 74 per cent tunnelling work of Mumbai Central -Mahalaxmi-Science Museum- Acharya Atre Chowk- Worli section of this Metro corridor is also finished,” said an official of MMRC, adding that production of prototype rake for this Corridor also in full swing. “Progress of manufacturing and testing of the first prototype Train (8 cars) at the manufacturing plant at Sri City is 82 per cent complete, which will be fully completed by the end of this year,” said officials.

The underground Metro 3 is planned to be operationalised in two phases. The stretch from Aarey Colony to Bandra Kurla Complex was supposed to be opened by December 2021, and the stretch from Bandra Kurla Complex to Cuffe Parade by mid-2022. However, the pandemic-induced lockdown and delay over depot land have eventually extended the project’s timeline.