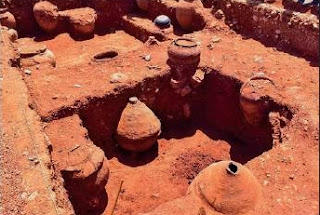 Fifteen burial urns have been unearthed from two adjacent clusters at Sivagalai in Tuticorin district. The state archaeology department is undertaking the second phase of excavations at Sivagalai.

Excavation director M Prabhakaran said that Sivagalai was suspected to be the burial site of a Sivagalai cluster, just like Konthagai in Keeladi cluster. The ASI had given its nod to excavate six places in the cluster. The second phase of excavation was being carried out at Sivagalai at a cost of ₹34 lakh. So far 40 burial urns had been found. Some of the urns were big measuring about two to four feet in height. Two quadrants that they had started excavating recently have turned exciting, as 15 burial urns have been found close to one another in a small area. The urns started surfacing from a depth of 50cm from the surface and went to a depth of 240cm.

Five urns were intact with lids and are expected to hold interesting details. Ten of them are in a good condition but without lids. The rest were damaged. The urns are to be opened soon in the presence of faculty members of Madurai Kamaraj University. The samples would be taken for DNA testing. While excavating the neighbouring villages, several of potsherds, a smoking pipe, bone point, spindle hole among other interesting artefacts were found.