Indigenous aircraft carrier to be commissioned next year 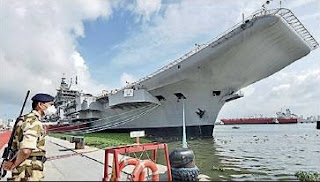 India’s indigenous aircraft carrier will become fully operational, with supersonic fighter jets and multi-role helicopters operating from its deck, only by mid-2023 at the earliest.

But once deployed, the 40,000-tonne carrier to be christened INS Vikrant will pack quite an offensive punch and project raw military power on the high seas.

“The combat capability, reach and versatility of the aircraft carrier will add formidable capabilities in the defence of our country and help secure India’s interests in the maritime domain,” said defence minister Rajnath Singh on Friday.

Reviewing the ongoing construction of the IAC at Cochin Shipyard at a cost of around Rs 23,000 crore, along with Admiral Karambir Singh, the minister said the government is “fully committed” to a strong Navy with operational reach and prowess to protect the country’s huge maritime interests.

“The Navy remains poised and combat ready to tackle any challenge. The Navy’s proactive forward deployment during the Galwan stand-off (with China last year) signalled our intent that we seek peace but are ready for any eventuality,” he added.

The commissioning of IAC, the most complex warship ever to be built in India with “nearly 75% indigenous content”, will take place next year. “It will be a befitting tribute to 75 years of India’s independence,” said Singh.

The sea trials of the IAC, which was first sanctioned by the government way back in January 2003, will begin in another couple of months.

India currently has only one aircraft carrier, the 44,500-tonne INS Vikramaditya.