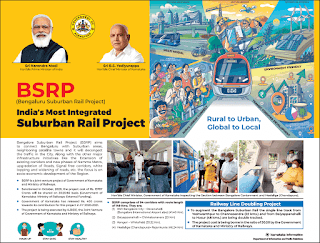 Yediyurappa took a ride along the Bengaluru Cantonment-Heelalige stretch to inspect the doubling work. The same stretch will be used for the first phase work from Heelalige (Chandapura) to Rajanukunte. The CM told reporters: “The Bengaluru suburban rail project is one of the most prominent projects announced by Prime Minister Narendra Modi. We have no doubt that the PM will lay the foundation stone for the project in three months when we have finalised tenders for the first phase.”

According to government officials, Karnataka has already written to the PMO seeking his consent for laying of the foundation stone. “In fact, we wanted the PM to lay it earlier last month itself, but due to Covid-19 we could not complete the tendering process. With the tenders likely to be finalised in three months, we have approached PMO,” said a government official.

Yediyurappa said the Centre has given its nod for Rs 7,400 crore external borrowings as part of the Rs 15,767 crore project. The project is being funded in the ratio of 20:20:60, with the state and Centre sharing the fiscal responsibility equally and the remaining 60% of the funding to be generated from loans. Sources say external borrowings will be from foreign agencies, for which ministry of finance has given in principle approval.

The project, which is being executed by K-RIDE, the JV of Karnataka government and Union railways ministry, will have four corridors with route length of 148km. The corridors are: KSR Bengaluru City – Devanahalli via Kempegowda International Airport (41.4km), Byappanahalli – Chikkabanavara (25km), Kengeri – Whitefield (35.5km) and Heelalige (Chandapura)– Rajankunte (46.2km). “Work on Byappanahalli-Chikkabanavara and Heelalige-Rajankunte will be taken up initially,” said a release from CM’s office.