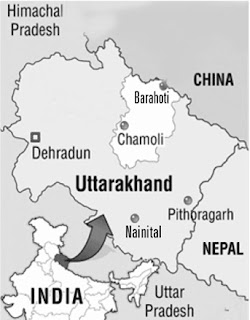 Chinese troops entered one kilometre into Indian territory and threatened shepherds grazing cattle in the Barahoti area of Uttarakhand's Chamoli district. The transgression took place on the morning of July 25 when a group of shepherds was asked to vacate the land by troops of the People's Liberation Army.

The incident comes in the backdrop of a prolonged standoff between Chinese and Indian troops at Dokalam near Sikkim. It emerged after New Delhi expressed its apprehension over Beijing's road construction in the Sikkim sector of the border. Consequently, China suspended the annual Kailash Manasarovar yatra and conceded that the decision to suspend the pilgrimage was due to the border scuffle.

Barahoti, an 80 sq km sloping pasture about 140 km from the Uttarakhand capital Dehradun, is one of three border posts in what is known the `middle sector', comprising Uttar Pradesh, Himachal Pradesh and Uttarakhand.

It is a demilitarised zone where Indo-Tibetan Border Police jawans are not allowed to take their weapons.

In 1958, India and China listed Barahoti as a disputed area where neither side would send their troops. In the 1962 war, the PLA did not enter the middle sector and focused on the western (Ladakh) and eastern (Arunachal Pradesh) sectors.

After the war, ITBP jawans would patrol the area with weapons in a non-combative manner ­ with the barrel of the gun facing down.

During negotiations on resolving the border dispute, the Indian side unilaterally agreed in June 2000 that ITBP troops would not carry arms in three posts, Barahoti and Kauril and Shipki in Himachal Pradesh. ITBP men go patrolling in civil dress and the Barahoti pasture sees Indian shepherds from border villages tending their sheep and people from Tibet bringing their yaks for grazing.

In the past, Chinese troops have been known to cross over and write `China' on rocks in the Chamoli district. This area has also seen aerial transgressions and infiltration by foot patrols in 2013 and 2014.

While the Indian Army has refused to comment on the latest incident, an official said that transgressions occur due to different perceptions of the boundary.

Both sides have reinforced troops and are maintaining positions along the border, with no sign of withdrawing soon.