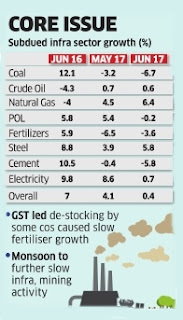 India's infrastructure sector growth slowed to a 19-month low in June, strengthening the case for an interest rate cut to support the economy as inflation fell to record lows.

Reduced output of cement, electricity and coal slowed the pace of expansion of the country's eight infrastructure sectors in June to 0.4%. The core sector had expanded 4.1% in May and 7% in June last year, indicating that high base of last year has also muted the growth.

An unfavourable base effect and inventory trimming prior to onset of GST may contribute to a contraction in industrial output in June 2017, in stark contrast to the 8.9% expansion in June 2016.