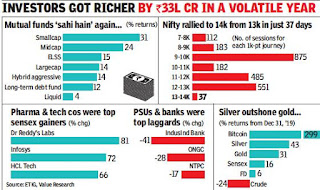 The last trading day of one of the most volatile and eventful years in Dalal Street’s recent history saw the sensex ending on a flat note, but at least in the green. On the NSE, the Nifty scaled the 14k mark for the first time, but settled marginally down on the day at 13,982 points.

On the BSE, the sensex rose for the sixth consecutive session and settled just 5 points higher at 47,751 points — a closing record. In the process, the sensex closed 2020 with a 16% gain, while for the Nifty it was 15%. However, the rise to record closings has come in a year when the indices fell to multiyear lows in late March, thanks to pandemic-induced fears among investors globally.

From its March-end close of 29,468 points, the sensex has more than recovered its early losses to give a 62% gain. The rally since the March trough also made investors richer by Rs 88 lakh crore, with the BSE’s market capitalisation now at Rs 188 lakh crore. And on an annual basis, the rise in market cap was nearly Rs 33 lakh crore, BSE data showed.

The year also recorded the biggest foreign fund inflows into the Indian stock market with total net buying now at nearly Rs 1.8 lakh crore. Over two-thirds of this came in the last two months alone, CDSL data showed. On a monthly basis, December recorded the best ever figure. At a net inflow of Rs.62,016 crore, this surpassed the Rs.60,358 crore recorded in November. The nearly 6,500-point gain in the sensex since the year’s beginning came mainly on the back of just five stocks — Infosys, Reliance, TCS, Kotak Bank and HUL. These five — out of the 30 that form the sensex — together accounted for 72% of the gains.

In forex market, after the rupee weakened to an all-time low below Rs.75-per-dollar as foreign funds took money out, a deluge of inflows led to the Indian currency’s appreciation. All through the year, the RBI played a stellar role — it sold dollars during the early part of the pandemic-led weakness in the rupee, and followed it with a purchase of nearly $100 billion in the later half of the year as the rupee strengthened. According to Kotak Securities VP Ravindra Rao, 2021 could be challenging for crude as markets would see normalisation of both demand and supply. While demand recovery will depend on how quickly the virus is controlled, supply side would mainly be dictated by OPEC and allies.