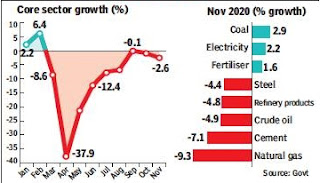 The crucial sector accounts for nearly 41% of the index of industrial production and the November numbers may impact the factory output, which will be released later. Between April and November, the core sector contracted 11.4%.

Separate data showed the Centre’s fiscal deficit touched 135.1% of the 2020-21 Budget estimates. The deficit at the end of November 2019 was at114% of the Budget target for 2019-20. Sluggish revenues and higher spending commitment has widened the deficit and most economists expect it to be way above the Budget target of 3.5% of GDP set for the current fiscal year.

With four months still left in the fiscal year, the government’s fiscal deficit had already climbed to Rs 10.8 lakh crore in April-November 2020, 33% higher than the year-ago level, and 35% higher than the full year Budget estimate.