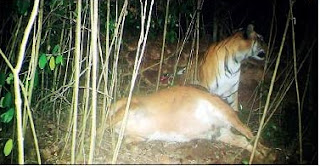 The forest department has spotted a tiger for the first time in one the conservation reserves along the Western Ghats of Maharashtra. Seven forest ranges were declared CRs in December last year.

Forest officials said the sighting of a tiger is of major significance as it highlights the purpose for which the forest ranges were declared CRs. A few days ago, a cattle kill was reported to the forest department following which over half-a-dozen cameras were installed at the site.

On Wednesday, one of the cameras recorded a male tiger with its kill. Clement Ben, chief forest conservator of Kolhapur, said, “Before declaration of the conservation reserve, we too had heard about the presence of a tiger in the region and had tried several times to get evidence. This time, we succeeded in getting photographic evidence. The CRs serves as a migration corridor for many wild animals and need to be protected to ensure their population increases.”

In December last year, the state wildlife board headed by chief minister Uddhav Thackeray had given the CR tag to the seven ranges — Amboli-Dodamarg, Chandgad, Ajara-Bhudargad, Gaganbawda, Panhalagad, Vishalgad and Jor-Jambhali — along the Western Ghats. These CRs now connect the protected forest areas such as Sahyadri Tiger Reserve, Radhanagari Wildlife Sanctuary and Tillari Wildlife Sanctuary that are already protected.

“We are installing cameras at several places. We expect the tiger to move up to the Chandoli forest range. We have issued alerts to local people to immediately contact us in case of any conflict with the tiger,” Ben said, adding that disclosing the location where the animal was spotted was not ethical as it could invite poachers.