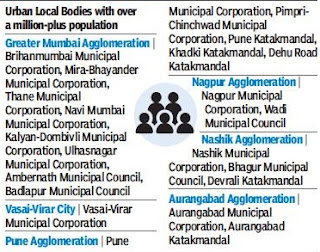 The Greater Mumbai urban agglomeration is the largest in Maharashtra with eight urban local bodies.

On Friday, the state urban development department released the list of urban local bodies in Maharashtra based on their population as million-plus cities and non-million-plus cities as per recommendations of the 15th Finance Commission. The classification is mandatory to access funds for improving air quality, improving, water, solid waste management and sanitation in the 50 million-plus urban agglomerations.

The report of the 15th Finance Commission was tabled in Parliament in February. As per the report, funds are to be allocated to urban local bodies based upon the category in which they are placed. The Centre has budgeted Rs 38,196 crore for 50 million-plus population urban agglomerations, and Rs 82,859 crore for the non-million ULBs. The funds are to be used exclusively for developing infrastructure and providing services to citizens. Salaries cannot be paid from these funds.

Excluding Mumbai, whose financial budget for 2021-22 is over Rs 39,000 crore, these funds would enhance the financial capabilities of the other municipalities, especially the smaller ones, to build capacity. For the smaller urban local bodies, the 15th Finance Commission funds could constitute as much as 25% of their annual budget, said officials. To ensure transparency and accountability on how funds are utilised, the 15th Finance Commission mandates public disclosure of two kinds of information: financial information, such as annual budgets, audited annual accounts and details of contractor payments, and outcomes/performance of the infrastructure and services developed. It also mandates the strengthening of the state finance commission and tabling of action-taken reports in the state legislature.