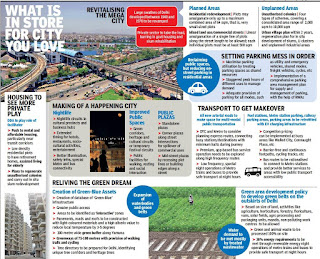 From sedate plotted colonies to slick studio apartments and traditional trading hubs to co-working spaces and gig economies, the Delhi Development Authority has envisioned a “future-ready” capital that would be a “24-hour city” with an active nightlife and in the same league as other global megacities.

Economy, environment and affordable housing are the main focus areas of Draft Master Plan for Delhi-2041, which has been put in the public domain by DDA for inviting objections and suggestions from the public for 45 days. The vision for MPD-2041 is to “Foster a Sustainable, Liveable and Vibrant Delhi by 2041”.

In a paradigm shift, the draft MPD-2041 envisages the private sector leading the housing supply scenario through development and redevelopment in the next 20 years. DDA would play the role of a “facilitator”, ensuring ease of doing business while maintaining a regulatory environment.

And, finally, Delhi is poised to get a vibrant nightlife. Streets with a high concentration of heritage areas and central business districts will be prioritised for setting up nightlife circuits. Hotels, restaurants and entertainment destinations in these circuits will have extended timings and special Metro connectivity and bus services. With 24-hour special activities, these areas will be safe and secure. Meanwhile, other public space hubs will be created around the city at the waterfront, forest lands, parks, transit hotspots and other popular public spaces.

In another major change in policy, MPD-2041 plans to address the housing needs of students, single working men and women, migrants, etc through affordable housing in the shape of rental and small-format housing like studio apartments, serviced apartments, hostels and dormitories.

A large number of residential areas developed in the 1940s-1970s are likely to see regeneration with a nuanced strategy, according to the requirements of each locality. This urban regeneration is expected to see improvement of the existing stock and creation of new units through densification. As the permissible residential FAR has doubled since the first MPD in 1962, this regeneration would see more densification through the reconstruction of plots.

According to the vision document, though Delhi is a logistics and trade hub, it hasn’t fully realised its niche role and potential as an economic hub. The MPD-2041 focuses on sectors like specialty health, tourism and higher education, apart from promoting cleaner production, startups, innovation and cyber economies by providing a variety of flexible and shared spaces to entrepreneurs in addition to opportunities and good working conditions. A more pragmatic land use for existing industrial areas is planned with a thrust on the service sector, IT, tourism and hospitality.

Delhi is a cultural capital too and has a large number of heritage assets, which the draft MPD-2041 looks at for preservation and "adaptive reuse" for preventing degradation and loss of historical assets and fabric.

While promoting development, the document also puts an equal emphasis on tackling the city’s consistently high levels of air, water and noise pollution, which are threatening not only the environmental assets and local biodiversity but also the health of citizens, the draft states.

The green and blue infrastructure — Delhi’s green belts and waterbodies — will play a key role in shaping its future, the draft Master Plan for Delhi 2041 envisages, focusing not only on their protection but also on increasing their net area.

The draft plan states these assets will help in mitigating climate change and play a key role in reducing air, noise, water and soil pollution. A database will be maintained by the government and Delhi Development Authorty to periodically assess their “health”.

To bring people closer to these natural assets, MPD 41 aims to provide public access to a few by developing them as recreational sites consisting of “interactive” zones where temporary activities such as yoga, nature classes, environmental research, picnics, camping and biodiversity tours will be permitted. Buildings will face these green-blue assets and maintain active faces in the form of balconies, windows and pedestrian entries.

Cycleways and walkways in and around these sites have also been encouraged. For the Yamuna, a 300-metre-wide green buffer will be required along the edge, with a 30-metre area left for grasses and ground cover, while development of 75-100-metre-wide greenways with cycling and walking trails have been suggested. However, no permanent structure will be allowed in the floodplain.

“The health of all environmental assets shall be monitored from time to time,” the draft plan states.

Growth in Delhi’s green cover will be carried out by using only native plants and species, which will act as pollution filters, while techniques such as Miyawaki forests and smog absorption towers can be adopted at hotspots. A “tree directory” will also be maintained, with each agency identifying unique tree corridors or heritage trees in its area.

Pavements, roads and roofs will be constructed or coated with light-coloured materials, with a high albedo value wherever possible. “This can reduce local temperature by 3-5 degrees Celsius. Road sections shall include appropriate trees and buffers to reduce air and noise pollution, as well as sustainable urban drainage components.”

Anumita Roy Chowdhury, executive director of research and advocacy at Centre for Science and Environment, says for the first time, new principles of urban planning have been adopted explicitly to control vehicular pollution, which is a good sign. “However, there is still scope and need for further tightening of the action targets for all pollution sources and overall air quality,” she said.