Forex Reserves Hit a Record $600 b 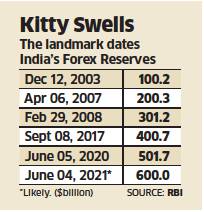 India’s foreign exchange reserves rose to a record $600 billion, although the central bank does not plan to introduce new instruments to manage these inflows.

After a risk-off period in April-May, the prospects for capital flows to India are improving again.

“As of last Friday, the country’s forex reserves touched $598.2 billion,” RBI Governor Shaktikanta Das said in his policy statement. “We are in the striking distance of achieving $600 billion of reserves. Based on our current assessment, we feel that the reserves have already crossed $600 billion.”

Analysis of historical data indicates that the last $100 billion has taken exactly a year to be added — the fastest since the global financial crisis of 2008.

There is apprehension that the rupee liquidity generated by the accumulation of dollars could impact domestic money market rates. But the central bank seems comfortable the way it is managing the flows.

“At the moment, there is no necessity to deploy additional tools to sterilise the forex inflows,” the governor said at the post-policy media briefing. “In any case, at the end of the day (through) our daily reverse repo window, the liquidity gets sterilised. It (need for new instruments) will depend on how the situation evolves.”

Such inflows help in easing external financing constraints, but could lead to financial market and asset price volatility. In the process, there could be “undesirable and unintended fluctuations in liquidity that can vitiate the monetary policy stance,” the governor said.

The Reserve Bank has been actively buying and selling dollars in various segments of the market. In FY21, the central bank bought $68 billion from the spot market alone.

“The success of these efforts is reflected in the stability and orderliness in market conditions and in the exchange rate in spite of large global spill-overs,” the governor said.