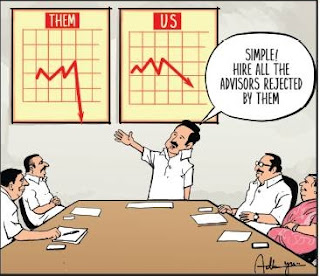 Within minutes after governor Banwarilal Purohit announced in his address to the state assembly about the formation of a five member economic advisory council for chief minister M K Stalin, the hashtag Tamil Nadu started trending on twitter. Accolades poured in for the state’s move to draft in Nobel laureate Esther Duflo, Prof Jean Dreze, Raghuram Rajan, Arvind Subramanian and S Narayan and the collective “bandwidth” of these economic experts.

An order constituting the advisory council said, at present the government is in the midst of a serious economic crisis induced by the Covid-19 pandemic. The fiscal situation of the government is also precarious with persistent high revenue and fiscal deficits and a large overhang of debt. The people’s expectations are high that the government would deliver on faster economic growth, social justice and equity through enhanced service delivery.

“The council comprises two macro economists and two development economists. The idea is nobody will doubt their credentials and they are among the best in the world. We want to identify specific issues and ask their advice and based on their inputs formalise what we want to do to enhance the capacity and capability of the state. It will be more action oriented, rather than report oriented and there is enough diversity of opinion there for us to get the right feedback,” a senior state government official said, while adding that the members of the council will not receive any “remuneration”.