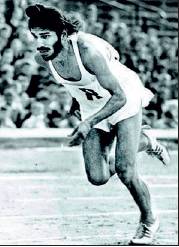 A couple of days after testing negative for Covid-19 and shifting out of the Covid-ICU, four-time Asian Games gold medallist Milkha Singh passed away due to post-Covid complications at Chandigarh’s Post Graduate Institute of Medical Education and Research on Friday. He was 91. “Dad just passed away,” his son and legendary golfer Jeev Milkha Singh confirmed.

Condoling his demise, Prime Minister Narendra Modi tweeted, “In the passing away of Shri Milkha Singh Ji, we have lost a colossal sports-person, who captured the nation’s imagination and had a special place in the hearts of countless Indians. His inspiring personality endeared himself to millions.”

The Athletics Federation of India also condoled his death in a tweet, “Very very sad news for all #Indians, legend Shri Milk-ha Singh Ji passed away just a while back.”

The legendary athlete’s greatest performance remains the fourth-place finish in the 400m final of the 1960 Rome Olympics. He also represented India in the 1956 and 1964 Olympics.

Singh, who was born in Gobindpura, now in present-day Pakistan, on November 30, 1928 as per school records, had become the first Indian athlete to win gold in the then British Empire and Commonwealth Games in Cardiff in 1958, a record which stood for more than 50 years when Krishna Poonia won the gold in discus throw event in 2010 CWG at Delhi. Singh had emerged as the winner in the 400m final in Cardiff edging out Malcolm Spence of South Africa with a timing of 46.6 seconds.

The nonagenarian was yet to get jabbed for Covid-19, and on testing positive on May19, he had told this correspondent over telephone, “It’s just a matter of time, I will be back soon, and get myself vaccinated.”

But destiny had something else written for him.