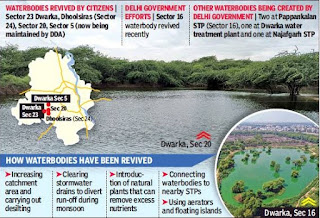 The recent creation of a seven-acre pond in Dwarka by Delhi government using treated water from Pappankalan sewage treatment plant may have paved the way for constructing four more waterbodies, which are planned to be completed in less than a year.

Delhi Jal Board would be using treated water to create two more waterbodies inside the Pappankalan STP in Sector 16, one inside the Dwarka water treatment plant and another inside the Najafgarh STP. All projects would utilise in situ measures, such as aeration, floating wetlands and ozonation to remove excess nutrients.

Dwarka has seen several citizen-oriented efforts in the past few years to revive waterbodies, which has resulted in rejuvenation of ponds and lakes in sectors 5, 20, 23 and 24. The focus is now on two waterbodies in sectors 8 and 25.

A DJB official said the waterbody in Sector 16, which was created in March, had resulted in recharging two million gallons of water daily and the groundwater level had increased by 0.5 metres. Measurement of the groundwater table 400 metres away from the lake also showed a recharge rate of 30 centimetres per day.

Under the “City of Lakes” project, 155 more waterbodies would be created or revived. The first phase would finish in June. Phase-II would be completed by June 2022 and Phase-III by December 2022. An official said while there were two STPs at Pappankalan, they would be using the Phase-II STP as it was designed to remove nutrients.

Locals who have revived waterbodies in Dwarka, meanwhile, have gone for a more traditional approach by diverting excess water from storm water drains and increasing the catchment area nearby. Plants have been used to absorb excess nitrates and phosphates. Diwan Singh, an activist, worked with several locals and the group Sukh Dukh Ke Saathi to revive waterbodies in sectors 20 and 23 and, recently, Sector 24’s Dhool Siras.

Singh said they were against using STP water, adding that the revived waterbodies would be able to sustain themselves throughout the year by natural means. “Dwarka has adequate stormwater drains. If they are simply cleared out and diverted to a depression, a waterbody can easily be revived or created,” he said.

The group also worked on reviving a waterbody in Sector 5, which was now being maintained by Delhi Development Authority. Singh said two more waterbodies, in sectors 8 and 25, required attention and could be rejuvenated in the future. “The government can look at these. The one in Sector 8 has dried up completely. Efforts to create more waterbodies will help Dwarka and its groundwater table return to normal once again,” he added.