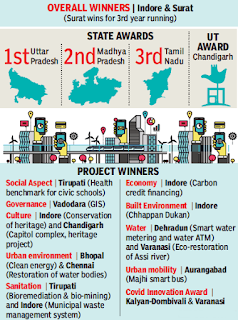 Surat and Indore have bagged the best award for their overall performance among 100 smart cities in 2020 while Uttar Pradesh won the best award in the category of states, followed by Madhya Pradesh and Tamil Nadu. This is for the third consecutive time that Surat has won the award since it was rolled out in 2018.

This is the first time the housing and urban affairs ministry has given awards to states for overall performance of their smart cities and for their proactive role. UP bagged the first award for taking up development of seven more cities on its own as smart cities in addition to the 10 selected by the Centre. The seven cities are Meerut, Ghaziabad, Ayodhya, Firozabad Gorakhpur, Mathura-Vrindavan and Saharanpur.

The third edition of the awards was announced by housing and urban affairs minister Hardeep Singh Puri on Friday. The awards were given across the themes of social aspects, governance, culture, urban environment, sanitation, economy, built environment, water and urban mobility among others. New themes were also added this year for sustainable business model of Integrated Command and Control Centres and innovation in Covid management. The joint winners under Covid innovation category were Kalyan-Dombivali in Maharashtra and Varanasi in UP.

According to the ministry, out of the total proposed projects under the mission, 5,924 projects worth Rs 1.78 lakh crore have been tendered so far and work orders have been issued for 5,236 of them costing around Rs 1.46 crore. It said 2,665 projects of Rs 45,080 crore have also been fully completed and are operational.

The ministry said 70 smart cities have set up and operationalised their Integrated Command and Control Centres, which are also functioning as war-rooms for Covid management, along with other infrastructure developed under the mission. These are being developed across all 100 smart cities.

It said that 310 “Smart Road” projects have been completed and another 459 are at tender or implementation stage. The ministry also said 1.12 crore houses under PM Awas Yojna have been sanctioned and over 83 lakh houses grounded. So far 105 lakh household water tap connections and 78 lakh sewer and septage connections have been provided under Amrut Mission.