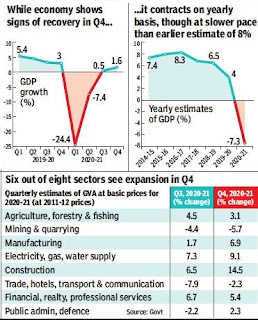 The Indian economy grew 1.6% in the January -March quarter of 2020-21, signalling a sharp recovery that started after two consecutive quarters of contraction due to the impact of the strict lockdown. For the full year, however, the economy contracted 7.3%, lower than the estimated 8% earlier.

The data released on Monday showed that the recovery had gathered strength in the fourth quarter of 2020-21 before the second wave hit the economy.

Economists attributed the growth recovery in the March quarter to the unlocking of economic activity. The 7.3% contraction was the sharpest in nearly four decades as the lockdown hurt the economy.

The recovery in the second half of 2020-21 was sharp. In fact, India was among the few leading global economies that witnessed positive yearon-year growth in the six months of October’20 -March’21, according to an analysis by Care Ratings. The other economies that registered positive growth in the last two consecutive quarters are China, Taiwan and Vietnam, the agency said.

“In Q4, private final consumption expenditure increased by 2.7% year-on-year, government consumption final expenditure by 28.4%, gross fixed capital formation by 10.8%. Exports increased by 8.7% and Imports by 12.3%. These signify a steady revival of demand in the second half of the year,” Krishnamurthy Subramanian, chief economic adviser, said in a presentation.

The government and the Reserve Bank of India had unveiled a raft of measures to help revive growth, which had collapsed against the face of the pandemic. Budget 2021-22 also unleashed several steps, including spending on infrastructure to revive growth. Subramanian said there are reasons to expect a muted impact of the second wave on the economy.

According to experts, the growth trajectory would depend on how quickly authorities are able to tame the pandemic and the pace of the vaccination programme. In his presentation, Subramanian, too, said there was an urgent need to contain the spread of the pandemic – through vaccination and strict observation of Covid-appropriate behaviour, and continued monetary and fiscal policy support.

The NSO data on Monday showed growth in the March quarter was robust across sectors with agriculture, industry and services sector displaying signs of revival. The agriculture sector grew by 3.1% in the three months to March over a high base of 6.8% in the year-ago period. The manufacturing sector recorded a 6.9% growth in the January-March quarter, higher than 1.7% in the previous quarter. The construction sector expanded 14.5% during the period, higher than 6.5% in the December quarter. The crucial services sector witnessed growth after a gap of three quarters in Q4 FY21, rising by 1.5%. The recovery was led by finance, real estate and professional service (5.4% growth) and public administration (2.3% growth). Some sectors such as hotels, transport, trade and communication continued to feel the pain inflicted by the pandemic and hurt the overall expansion of the services segment.