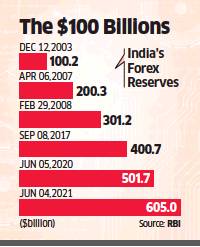 The country’s forex reserves crossed the $600-billion mark for the first time on the back of continued foreign investment flow into the capital markets. According to the RBI, forex reserves increased by $6.8 billion in the week ended June 4 to $605 billion.

The current level of forex reserves are enough to cover nearly 16 months of imports. According to RBI governor Shaktikanta Das, the central bank has enough ammunition to meet the challenges arising out of “global spillovers” a reference to any sudden policy changes in the US or geopolitical shifts that could lead to funds exiting India.

India is now less than $200 million behind Russia, which has an almost identical level of reserves. The pileup of foreign exchange reserves is an outcome of the RBI’s strategy of buying dollars when there is a sudden spurt of inflows which causes volatility in the forex markets. In FY20, the RBI added over $100 billion to the reserves. It has also sold dollars when the rupee came under pressure. In February and March, the central bank had depleted its stockpile by almost $10 billion by selling dollars.

Foreign fund buying of shares and debt in India also added to the reserves. According to the data from CDSL, in FY21, net inflows of about $37 billion came in through these routes and while another $400 million net flows were added to it.

According to a report by Brickworks Ratings, the exchange rate volatility demands more forex interventions by the RBI. Hence, the accumulation of forex reserves helps the RBI to maintain the exchange rate at a comfortable level. The report points out that doubts over India’s economic recovery led to significant capital outflows in April and May. The RBI’s purchase of dollars also has a corollary impact on rupee liquidity. Every $1 billion that the RBI purchases results in around Rs 7,300 crore of rupee funds being released.