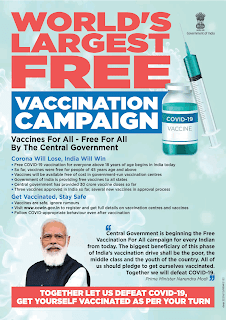 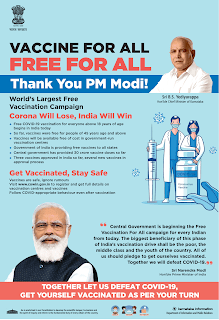 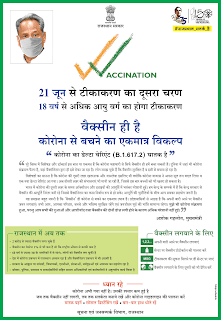 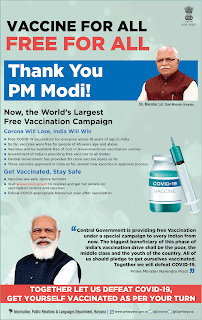 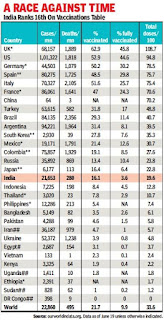 India’s vaccination record till date has been middling among the world’s 30 most populous countries with a rank 16 among them in terms of doses per100 population.
At 19.6 as of June 19, India’s level is less than a fifth of what the UK has achieved but several times what several Asian and African countries have.
The rank remains16 among these 30 countries even if we were to consider the proportion of the population fully vaccinated, but in this case the gulf between the UK (45.8%) and India (3.6%) is considerably wider. What is more a matter of concern is that the countries ranking below India on this chart — all barring Ukraine from Asia or Africa — have been significantly less badly hit by the pandemic as their cases and deaths per million show.
The only countries among these 30 with lower vaccination levels that have been hit harder are Iran and Ukraine.
Conversely, among those with higher vaccination levels, almost all have seen a much higher level of cases and deaths per million than India, China, South Korea and Japan being the exceptions.
The data from ourworldindata.org tracks both the number of people given the first dose and those that have been fully vaccinated. In the case of China, this break-up is not available, but with over a billion or 100 crore doses administered in that country, at least half that number, that is almost equaling 500 million people or roughly 36% of their population, would have received their first shot of the vaccine.
Those above India on this chart are not all developed countries. From the developing world, China, Turkey, Brazil, Mexico and Columbia, all have provided a larger proportion of their populations shots.
Each of them has also fully vaccinated a bigger chunk of its population than India. Vaccination is India has been constrained by supplies but is expected to improve, particularly from August. Whether that will be in time to prevent or minimise a third wave of Covid-19 is another matter.