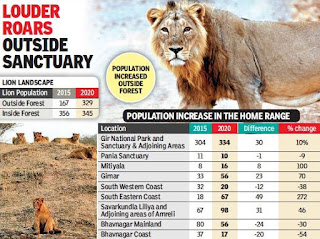 The lion number in Gujarat has officially crossed 700 this year, registering a 6-8% rise in the population, top sources in the state forest department said. The increase was noted in the ‘Poonam Avlokan’ (population observation exercise during full moon). The exercise was first held last year in June in place of Lion Census 2020 due to the Covid-19 pandemic.

The officials said that a count of lactating lionesses (adult females with cubs less than one year of age) was also undertaken. This data is being studied. Of the 260 adult females, 23% were recorded to be lactating in June 2020.

The officials said that the count in 2021 has revealed that the lions’ range spanned 30,000 sq km and they annexed no new territory over the past year.

The officials in Gandhinagar said that the lion population remains the same in Gir, Mitiyala, Girnar, and Pania sanctuaries. The population growth has been mainly in zones outside the sanctuaries.