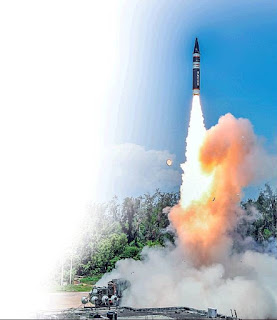 In a step towards bolstering strategic deterrence capabilities, India successfully tested a new-generation nuclear-capable Agni ballistic missile from the test range on the Abdul Kalam island off the coast of Odisha.

The advanced two-stage missile called `Agni-Prime’ has a strike range from 1,000 to 2,000-km. “Test-fired at 10.55 am, the missile was tracked by various telemetry and radar stations positioned along the eastern coast. It met all mission objectives with a high-level of accuracy,” said a DRDO official.

The Agni-P missile has been developed with new propulsion systems and composite rocket motor casings as well as advanced navigation and guidance systems. “It’s a completely new missile, the smallest and lightest among the entire Agni series of ballistic missiles,” a scientist said.

Significantly, Agni-P is also a canister-launch missile like the country’s first intercontinental ballistic missile, the over 5,000-km Agni-V, which is now in the process of being inducted by the Strategic Forces Command.

“Canisterisation” of missiles gives the armed forces the requisite operational flexibility to store it for long periods, swiftly transport it through rail or road when required, and fire it from anywhere they want.

“The hermetically-sealed canister protects the missile from the environment. It also serves as a launch platform since the missile is stored in it in a ready-to-fire configuration. It reduces the response time as well as ensures higher reliability with less maintenance,” the scientist added.

The Agni-P missile will require at least a couple of more “developmental trials”, followed by “user trials”, before it is ready for induction. The missile will gradually replace the Agni-I (700-km) missiles in the arsenal of the tri-Service SFC, which also has the Prithvi-II (350-km), Agni-II (2,000-km) and Agni-III (3,000-km) missile units.

While India has also for long modified some Sukhoi-30MKI, Mirage-2000 and Jaguar fighters to make them capable of delivering nuclear gravity bombs, the third leg of the “nuclear triad” is represented only by the solitary nuclear ballistic missile submarine INS Arihant at present.