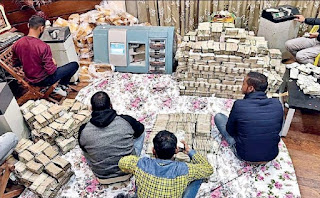 Rs 175 crore and counting—that’s the amount of “unaccounted cash” seized from UP businessman Piyush Jain’s home in Kanpur during a search by a Directorate General of GST Intelligence team on Thursday and Friday and more hidden money is likely to tumble out as some of his properties in Kannauj are still being searched. Jain from Chhipatti in Kannauj is known primarily as a perfume merchant. He has around 40 companies, including two in West Asia, and owns a house, head office and showroom in Mumbai.

Officials said tax evasion of about Rs 3.09 crore through shell companies was discovered. “Jain took loans in the name of shell companies and has huge foreign transactions,” a source said. “Documents are being scrutinized. SBI officials are helping count the seized money.”

The search teams combed 11 premises of Jain and two of his partners—a pan masala manufacturer and a transporter—that included factory outlets, offices, cold storages, and petrol pumps in Kanpur, Mumbai, and Gujarat.

The three are accused of ferrying goods with fake invoices of bogus firms. These invoices were below Rs 50,000 for a truckload, without generating e-bills to avoid paying GST. Sources said 200 fake invoices were found and Rs 1.01 crore was seized from the transporter.