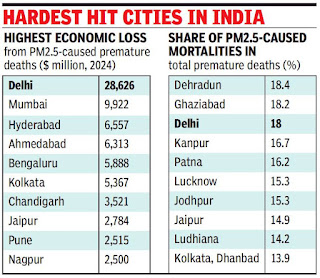 Cities with million-plus population in the Indo-Gangetic plain that fail to meet National Ambient Air Quality Standards have the highest burden of premature mortality due to noncommunicable diseases caused by PM2.5 pollution. In economic losses caused by such mortality, Delhi tops the list, says a study published in Nature by scientists of CSIR-NEERI. The scientists computed economic damage of more than $90 billion in 2017, about 3.4% of the country’s GDP, from mortality caused by pollution from particulate matter.

The study quantified the economic burden due to premature mortality caused by PM2.5 exposure in 31 non-attainment cities, or cities that consistently failed to meet air quality standards. Several cities in other parts of the country including Mumbai, Hyderabad, Ahmedabad, Bangalore, Pune and Nagpur are placed behind Delhi in economic losses caused by such premature mortality.

Indo-Gangetic plain cities including Delhi, Lucknow, Patna and Kolkata, accounted for more than 43% of the mortality due to pollution from PM2.5 concentrations. Some of the cities with the highest PM2.5 concentrations, such as Ghaziabad, Dehradun, Kanpur, Patna, Delhi and Lucknow had levels several times the prescribed annual average. This was attributed to indigenous pollution sources as well as meteorological conditions, topography, atmospheric changes and crossboundary movement of pollutants from neighbouring states and outside India. The lowest concentrations were observed in cities in Karnataka, Gujarat, Chhattisgarh and Odisha because of low population density and favourable meteorological conditions. Despite being subjected to low PM concentration, Ahmedabad and Bangalore reported high mortality cases, noted the study.

Though there were intercity variations, ischemic heart disease accounted for the largest proportion of deaths due to PM2.5 pollution followed by stroke and chronic obstructive pulmonary disease and lower respiratory tract infections.