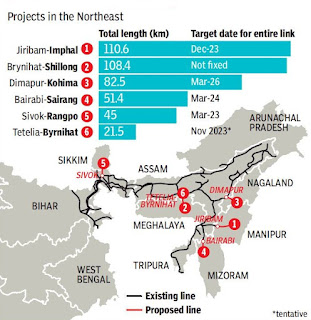 The central government’s target to bring all the capitals of the northeastern states on the railway map by 2024 is likely to get delayed further as the national transporter is yet to fix the target for the railway link between Byrnihat and Shillong in Meghalaya.

The work on connectivity in this route has remain stalled since May 2017 for want of permission from the state government after protests by Khasi Students’ Union and other organisations, senior railway officials of the Northeast Frontier Railway said. According to the updated status of the remaining projects, the entire Dimapur-Kohima rail link in Nagaland is also likely to be completed by March 2026. Officials said despite several challenges in the region, they have been working hard to expedite the works.

“How can you carry out any work on a stretch where locals are not allowing us to carry out any activity? The rail connectivity project is only going to bring economic prosperity to locals and they will be the biggest beneficiaries,” said an official in reference to the delay in the work on the Shillong link.

Out of eight, the capitals of Assam, Arunachal Pradesh and Tripura have been connected with railway networks and work is in progress on the remaining five, said Northeast Frontier zone general manager, Anshul Gupta. According to general manager (works) Sunil Sharma, with the government expanding the rail link across the region as part of its ‘Look East’ policy, they have stepped up monitoring of the ongoing works and will go for phase-wise commissioning of different lines so that people can benefit.

The railways is currently implementing projects worth Rs 55,000 crore.

It said these projects will positively impact the lives and the economic activities of people in the region.