In a strong endorsement of Uttar Pradesh chief minister Yogi Adityanath, Prime Minister Modi on Saturday gave a new term “UP+ Yogi=Upyogi (useful)” to the election lexicon. “UP plus Yogi bahut hai upyogi (Uttar Pradesh plus Yogi have great utility),” he said, indicating that Adityanath would be the CM face of the party for the upcoming assembly elections.

Modi made the comments after launching the Rs 36,230 cr, 594-km long six-lane Ganga e-way project in Shahjahanpur, pegged to be the longest in the country at 594 km. The expressway will connect the eastern and western regions of UP from Meerut to Prayagraj. The project is set to be completed in 2024.

“This expressway will bring new industries and create employment opportunities for thousands of youths...,” the PM said in his 40-minute speech to a crowd, which BJP leaders said was over one lakh-strong.

Modi also took a dig at the opposition, saying: “You have seen how the money of the government was used by other parties. Today, it is being used by the government for development work. Earlier, these projects only started on paper so politicians filled their coffers. Today, these projects are ensuring that your money is saved and is in your pocket...There are some political parties that have problems with the country's heritage and development...”

The PM also lauded the Yogi government for the law-and-order situation in west UP. He also said: “Before the BJP took charge, there was a saying that one should return home before sunset because people who flashed kattas (countrymade pistols) ruled the roads...”

He said the Yogi government had "bulldozed" the mafia in the state. Modi tried to connect with the crowd by starting his speech in the local dialect and said that he feels blessed after touching the soil of revolutionaries such as Ram Prasad Bismil, Thakur Roshan Singh, and Ashfaq Ullah Khan, the heroes of the Kakori incident. 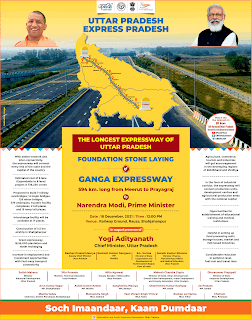