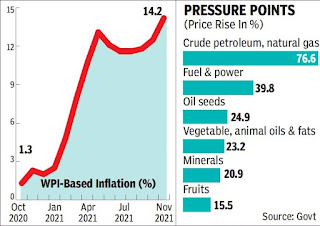 Wholesale price-based inflation shot up to 14.2% in November due to low base and a spike in food and crude petroleum prices, the highest since the current series was launched over a decade ago. While this is the highest monthly reading in almost 30 years, the data is strictly not comparable given that the index was revised a decade ago.

November was the eighth straight month of double-digit wholesale inflation, causing some headache for the government ahead of crucial state assembly elections in the coming months.

The monetary policy committee, however, uses retail inflation as the price barometer, which was estimated at 4.9% in November compared to 4.5% in the previous month, to decide on interest rates. RBI expects it to remain above 5% during the current and the next quarters, but well within its tolerance zone of 2-6%.

The divergence in wholesale and retail inflation is attributed to higher costs, which companies are seen to be passing on to consumers.

“WPI inflation at 14.23% in November was the highest since 1991… Cost pressures are also becoming more broad-based as food inflation has begun rising in addition to already elevated non-food inflation. The consumer price index data indicates producers have been gradually passing through these cost pressures to consumers," said Dharmakirti Joshi, chief economist at ratings agency Crisil.

Food inflation went up 4.9% during November as wheat, fruits and eggs, meat and fish prices rose.

Government sources attributed the rise to a low base of 2.3% in November 2020, as well as a surge in global crude prices. The impact of higher crude prices was reflected in fuel prices with cooking gas prices rising 65% in November, while petrol and diesel saw an increase of over 85%. What added to the price rise was a surge in the minerals group as well.

As a result, the manufactured segment saw a near 12% jump, with edible oil surging 23% and basic metals by 29%. A sharp increase in metal prices has already forced companies to increase prices of products such as automobiles. “The international commodity prices and fuel prices have been very high. Countries such as the United States, which have traditionally reported low inflation, are also now reporting record inflation levels,” a government source said.

Economists are, however, not predicting an immediate softening on the wholesale front. “Although the prices of various food items have displayed a seasonal downtrend and those of several commodities have corrected to an extent following the reality check provided by the Omicron variant, the Indian rupee has depreciated in recent sessions, which would curtail the extent of moderation in the WPI inflation in December 2021,” ICRA chief economist Aditi Nayar said.