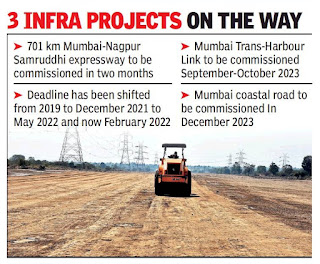 The 701 km Mumbai-Nagpur Balasaheb Thackeray Samruddhi Expressway will be opened for traffic in the next two months, said urban development minister Eknath Shinde who is also in charge of the state’s road agency, MSRDC.

Last month, the state government granted another 6-month extension to MSRDC managing director R Moppalwar who has been overseeing execution of the project.

Shinde was speaking at the Lokmat Infra Conclave on Wednesday. “The government is creating a network of roadways in the state to improve connectivity and increase business activity. As environment is a very crucial issue these days, we’ve taken care to create a green zone along this route, including underpass for wildlife,” he said, adding that the Mumbai Trans-Harbour Link would be commissioned by September-October 2023 while the coastal road would be thrown open by December 2023.

He said the plan is to connect all state districts for which 5,500km of roadways has been proposed. Once the expressway is commissioned, we will start work on extending it to Gondia, Bhandara, right up to Gadchiroli,” he said. “Like Mumbai-Pune expressway linked regions to Mumbai and helped growth, this too will allow the distance to be covered in 6-7 hours and give growth an impetus in Vidarbha, Marathwada,” he said.

Mumbai’s municipal commissioner Iqbal Chahal said that the BMC would spend Rs 12,700 crore on the coastal road from its own resources without availing of any loan either from the central government or the state government. So far, the city’s civic body has already spent over Rs 6,000 crore on the project and work was carried out uninterrupted all through the pandemic.

Industries minister Subhash Desai said Mumbai-Pune expressway was the single most reason for industrial development of Pune and nearby areas. He said the industry’s goal of Rs 2 lakh crore investment, through its Magnetic Maharashtra programme, will be achieved by month-end, and by next year the state will receive another Rs 5 lakh crore investments of which Rs 3 lakh crore is expected in one sector alone.

State environment minister Aaditya Thackeray said that the state government is keen on having only electric vehicles for all public transport across Maharashtra.